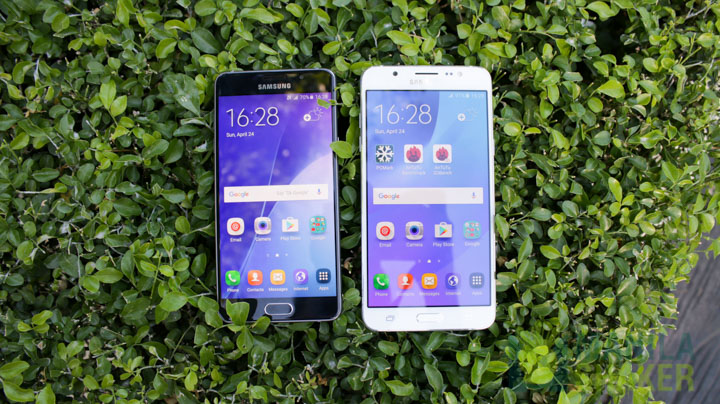 We reviewed and compared the new 2016 Galaxy A series just a couple of weeks ago. This series a much expensive mid-range compared to the Galaxy J series. We put the latest Samsung Galaxy J7 (2016), priced 15k in the Philippines, against the Galaxy A5 (2016) to find out if which has more value for your money. Is it the affordable Galaxy J7 or the premium Galaxy A5? Let’s find out the answer in our Ultimate comparison.

The Galaxy A7 (2016) is way more expensive than the Galaxy J7 (2016) so we chose the Galaxy A5 instead since the only main differences between A7 and A5 are the screen size, battery, and RAM.

The Galaxy A5 is dominated by the glass and metal build, a similar footprint to Galaxy S6 if you still remember. I really like the slightly curved Gorilla Glass 4 up front and on the back. The A5 really feels premium in my hands unlike the plastic and metal build of the Galaxy J7. The fingerprint sensor on A5 is fast and accurate comparable to flagship phones. Unfortunately, the J7 and the rest of the J series lacks fingerprint scanner.

The removable battery of the Galaxy J7 is its biggest advantage in design. The J7 feels solid despite the plastic back, thanks to the metal frame that wraps around it. It also features dual-SIM and microSD card expansion as on the Galaxy A5 with hybrid SIM and SD card tray.

Overall, the A5 is a standout and looking high-end device while the J7 still felt solid but with a plain-looking exterior.

Both are rocking a full HD Super AMOLED panel, the J7 has a 5.5-inch wide screen while the A5 tips at 5.2-inch with Gorilla Glass 4 on top. There’s not much noticeable sharpness difference at all even the J7 has a lesser pixel density. As usual, colors pop out on both panels. Contrast is really good as well as the brightness. You can’t go wrong with any of these punchy Super AMOLED screens.

The Galaxy A5 has a slightly brighter and more contrast photos but the Galaxy J7 is more consistent producing sharper output even in low light or night shooting.

Both have really effective beautification in selfie shooting but they lack lively and natural colors.

In video shooting, the A5 beats the J7 in saturation and stabilization because of the missing OIS on the latter shooter.

Powering the Galaxy A5 is a Snapdragon 615 octa-core chip with 2GB RAM, though, there is also an Exynos 7580 variant like what’s found inside the Galaxy J7. The speed difference is not noticeable unless you would put them side by side. Generally speaking, both felt fast and snappy as the other with occasional stuttering. In benchmark scores, the J7 beats the A5 because of the higher clocked CPU and 3GB RAM.

The Galaxy J7 has a removable 3300mAh battery while the A5 has 2900 mAh. Battery life on both is really good. The Galaxy A5 lasted few hours more in our endurance rating, still the Galaxy J7 nails an above average score. Charging took faster on the A5 at 1 hour 30 minutes, the J7 charges from 0 to a 100% in roughly 2 hours. If you’re looking for mid-rangers with great battery life, these are two of the better options out there.

We found out that the mono speaker on each is relatively loud as the other. Although we prefer the bottom-facing speaker on A5, the loudness on both is average with a quite weak bass but crisp vocals. 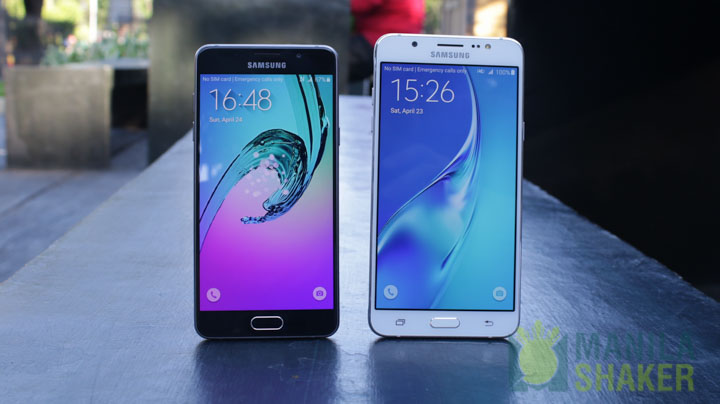 The price difference between the Galaxy A5 and J7 is quite high with the former priced for around Php 20k or $430 USD and Php 15k for the Galaxy J7. If you’re not really up for the premium design of the A5, then the J7 is a really good mid-ranger you should check. For the A5, it’s still worth for your money though a bit overpriced in my opinion.

Realme 5i vs OnePlus 7 Pro Camera Comparison – Budget vs Flagship

Realme 5 Pro vs OPPO A9 2020 Comparison – Is Bigger Battery Enough?